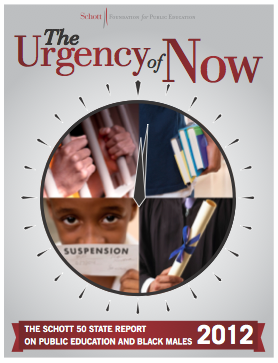 The Urgency of Now: The Schott 50 State Report on Public Education and Black Males, a new report from the Schott Foundation for Public Education, finds that only 52 percent of Black male and 58 percent of Latino male ninth-graders graduate from high school four years later, while 78 percent of White, non-Latino male ninth-graders graduate four years later. The report suggests that without a policy framework that creates opportunity for all students, strengthens supports for the teaching profession and strikes the right balance between support-based reforms and standards-driven reforms, the U.S. will become increasingly unequal and less competitive in the global economy.

The report cites the "pushout" and "lockout" crises facing Black and Latino male students – which are the result of  "an unconscionable level of willful neglect, unequal resource allocation by federal, state and local entities and the indifference of too many elected and community leaders." We need to pivot from a standards-driven reform agenda to a supports-based reform agenda that provides all students equitable access to the resources critical to successfully achieving high standards.

To cut down the alarming “pushout” rate, the Schott Foundation is supporting the recently launched Solutions Not Suspensions initiative, a grassroots effort of students, educators, parents and community leaders calling for a nationwide moratorium on out-of-school suspensions. The initiative, supported by The Opportunity to Learn Campaign and the Dignity in Schools Campaign, promotes proven programs that equip teachers and school administrators with effective alternatives to suspensions that keep young people in school and learning.

Schott calls for students who are performing below grade level to receive “Personal Opportunity Plans” to prevent them from being locked out of receiving the resources needed to succeed. The report highlights the need to pivot from a standards-driven reform agenda to a supports-based reform agenda that provides all students equitable access to the resources critical to successfully achieving high standards.