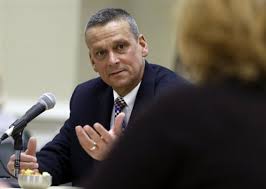 Tony Bennett, Florida's now-ex-Education Commissioner, resigned today in the wake of a scandal over his role in influencing the rating of an underperforming charter school. The school, headed by a political donor, had its original "C" grade changed to an "A".

The scandal calls into question Bennett's leadership given that he rose to fame by advocating a tough, data-driven accountability system favored by many policymakers in today's standards-driven education reform environment.

Emails obtained by The Associated Press show Bennett and his staff scrambled last fall to ensure influential donor Christel DeHaan's school received an A,' despite poor test scores in algebra that initially earned it a 'C.'"

When education officials talk about "accountability," they're usually doing it in the context of holding teachers and schools responsible for low graduation rates or performance on standardized tests. At first glance, that might sound like reasonable, responsible oversight, right? Except when it comes to education reform, "accountability" can be a loaded double standard that demonizes struggling public schools, lauds charter schools and voucher programs, and lets policymakers off the hook for failing to invest adequately in those struggling public schools.

The Miami Herald called Bennett's resignation a "major setback for Gov. Rick Scott and state education leaders," who are firmly in the accountability camp. His resignation is also a chance to redefine the jargon that's doing our national education system more harm than good.

Responsibility for student success doesn't rest solely on the shoulders of educators, schools or parents. Equally important is making sure students have access to things like pre-K, experienced teachers, school counselors, health services, tutors, and college-prep classes – all of which cost money and are less likely to be available in low-income districts that lack the funding to provide them.

The result is an achievement gap that lies along stark racial and socio-economic lines.

Instead of working to rectify those inequities in access to crucial resources and opportunities, policymakers have taken to establishing standards (like the Common Core) without acknowledging what many students need to meet them. The reasoning goes that if we hold schools accountable to those standards, use a public rating system to shame them when they fail, and offer charters or vouchers as alternatives, competitive market forces will push all schools to improve with no additional supports necessary.

The problem is, this approach doesn't work. And so long as rising income inequality forces more children, communities and schools into poverty, blind faith in standards without supports will continue not working. Charters and vouchers don't bring the benefits of marketplace competition to school districts, they drain them of resources. And while they're not any more effective than public schools, policymakers are willing to overlook their faults – and sometimes even cover them up in Bennett's case.

It's time to take back the definition of "accountability." It shouldn't mean "shaming struggling schools." It shouldn't even mean "ousting corrupt politicians who are cooking the numbers."

"Accountability" is a two-way deal. If we set achievement standards for students and schools, we should set standards for policymakers to provide those schools and students with everything they need to succeed.