Ed Researcher on WI Speaking Tour About Impact of Vouchers

Nationally recognized researcher and academic Devon Carlson will be in Wisconsin in November on a week-long tour to talk about the impact on students, schools, and communities of using public tax dollars for private schools — better known as the voucher program.

His most startling finding is that children who leave or are asked to leave the voucher schools in Milwaukee are the poorest and the lowest performing, despite what is said by so-called school choice advocates. The good news is that once they leave the private schools these same poor, low-performing children make large academic gains once they are back in Milwaukee Public Schools (MPS).

Carlson, an assistant professor of political science at the University of Oklahoma, will make stops in Green Bay, Rothschild, and Milwaukee (see below for schedule) to talk about his latest work, Life After Vouchers: What Happens to Students Who Leave Private Schools for the Traditional Public Sector? He earned a PhD in political science from the University of Wisconsin-Madison.

He said he is not coming to Wisconsin “to tell you if the private school voucher program should or should not be expanded or whether or not Wisconsin should or should not have one at all.” Carlson is making this tour to lay out the relevant issues, research, and evidence — not the political consequences — that should be considered in the decision.

SWSA is bringing Dr. Carlson to Wisconsin and coordinating his visit around the state. The organization represents 28 urban and suburban school districts and works to support and promote world class schools through research, advocacy, public policy and effective communication for the benefit of students and the economic vitality of the region.

What the research says about vouchers

Carlson’s research focuses on school choice policies, and his work has been published in a variety of reviewed journals. His most far-reaching work was to explore in more depth the students who leave the Milwaukee Parental Choice Program (MPCP or vouchers) and return to MPS.

He found that those who leave a voucher school “are among the lowest-performing and most socio-economically disadvantaged students in the voucher sector.” This fact, Carlson said, corroborates the work of others. The more startling finding is that “after leaving the MPCP and enrolling in MPS, all students (including the poorest) exhibit a significant increase in achievement scores.”

These findings would seem to cast doubt on the assumption and public relations from school choice advocates that private schools in the voucher program do a better job of educating poor children.

Dr. Carlson has also found a reason for communities all over Wisconsin to pay attention to the expansion of the voucher program statewide, public policy included in the recently passed state budget. Acknowledging there will be little short-term impact in the expansion, he talks about a large impact on future funding of all 424 state school districts.

“The reality facing all schools (is) that education funding is pretty much a zero-sum endeavor,” he said. “Any dollars  that go to one sector are, by definition, not available to the other.”

Because the history of the voucher scheme is that the Legislature will raise the caps and extend eligibility criteria as soon as possible, “even if rural districts are unlikely to be significantly affected next year that is by no means guaranteed to be the case a few years from now.”

Dr. Carlson will make public appearances around the state 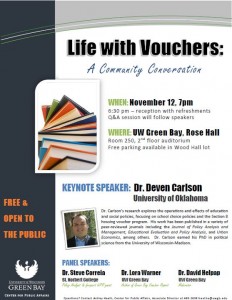 Although Dr. Carlson’s appearance before SWSA and talk with the Journal Sentinel editorial board won’t be public, there will be plenty of opportunity to hear about and discuss his groundbreaking work: