What Happens When Parents, Students and Teachers Take a Stand Together? 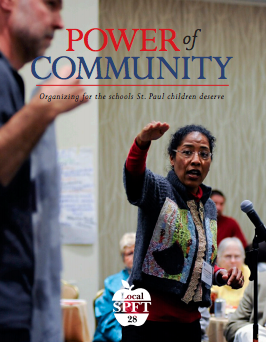 When it comes to creating real change in public schools, the answer isn't to impose top-down reforms. Instead, it comes down to the hard work of creating partnerships between teachers, parents, students and all the stakeholders in a community to ensure that every student has access to the resources they need to succeed.

Over the past year, St. Paul, MN, has emerged as a leader in creating these types of partnerships, and a new report from the St. Paul Federation of Teachers (SPFT) details how teachers, parents and students banded together and used the union's contract negotiations to secure key resources and opportunities for all students.

"Power of Community: Organizing for the Schools St. Paul Children Deserve" centers on the SPFT contract negotiations that culminated in February 2014. Ahead of the negotiations, the union spent months holding community meetings with parents and students to build a collaborative platform, "The Schools St. Paul's Children Deserve," which they took with them to the bargaining table. The platform calls for increased access for students to things like smaller class sizes, school nurses, couselors, pre-k and culturally relevant education.

With the community at their backs, the SPFT teachers also threatened to go on strike if the district refused to consider the platform's demands. The threat of a strike and the powerful labor-community coalition were enough to push the district into addressing the coalition's demands, and the resulting contract was a victory for teachers and their students.

Whether St. Paul's strategy for labor-community organizing catches on in other cities remains to be seen, but the whole story is well worth reading, so check it out here! And read their platform, "The Schools St. Paul's Children Deserve," here.