This post originally appeared on the Alliance to Reclaim Our Schools (AROS) blog. The Schott Foundation is a member of AROS. 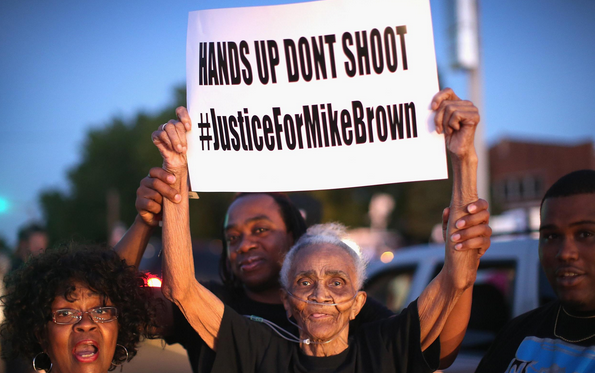 The recent murder of Michael Brown, another unarmed Black youth, by a police officer in Ferguson, Missouri, has sparked anger and protests across the country.  It has led to important conversations about the criminalization of youth of color, the militarization of the police, and what we can do to end such injustices. Such tragedies are all too common in this country; a Black person is victim to an extra-judicial killing every 28 hours. The trauma that this creates in Black and Brown communities is immeasurable and felt heavily in our schools, which are starved for resources and wholly unequipped to support young people’s healing.  Ferguson schools have had to delay the beginning of the school year out of concerns for students’ safety. This exacerbates challenges for families who depend on schools to provide care and food for their children.

As parents, students and teachers, we see massive divestments in schools that serve low-income Black and Brown youth. At the same time, police forces are bolstered with technologies and equipment that cost millions of dollars and do more harm than good. Spending on the nation’s criminal justice system has increased by 127% from 1987 to 2007, while spending on higher education only went up by 21%, according to the Pew Research Center. Our schools are forced to cut nurses, counselors and teachers. Sometimes, even the neighborhood school itself is forced to closed. In Philadelphia this year, students suffered as Governor Corbett spent “nearly half a billion dollars this year on prison expansion while the School District of Philadelphia was forced to lay off over 4,000 employees at the beginning of the school year due to a budget deficit of $304 million” states the Philadelphia Student Union.

Rather than turn to methods like restorative justice, we continue using “zero-tolerance” practices that criminalize youth of color and depend heavily on the use of police and security guards in schools. Programs that have proven to more effectively address issues like discipline in schools are not adequately funded, if they are used at all. Thus students face traumatizing situations in their communities with the police, then go to schools that are also full of police. It is almost certain that the Ferguson schools like many districts across the country, which have been struggling to remain accredited, will not be able to adequately address the needs of the returning students who have experienced such trauma. Compare that with the funding immediately available for police to respond in force to the protests in Ferguson in the wake of Michael Brown’s murder. Because of the relentless disinvestment in our public schools, we are failing our young people.

Black youth understand only too well this reality. The Black Youth Project’s survey of young people finds that nearly “three-quarters (73.2 percent) of Black youth believe the legal system does not treat all groups equally, a rate considerably higher than that for white and Latino youth.” This highly disparate treatment in both the criminal justice system and the educational system demonstrates a massive injustice against young Black and Brown people. This injustice must be reversed if we are going to live up to the promise of equal opportunity in our schools and equal treatment under the law.

In solidarity with the protests happening in Ferguson and in remembrance of all those killed by police brutality, communities across the country are taking action. Over 90 cities participated in the National Moment of Silence on August 14 with many actions continuing over the weekend. Organizations working with diverse groups of people are issuing statements in support of the struggle against police brutality such as that put out by the National Day Laborer Action Network:

"As a movement that is fighting criminalization to stop deportations and detention, Latinos and immigrants have a duty to stand alongside those who have been fighting it far longer.  On the streets of Ferguson, people have bravely sounded an alarm on the crisis of violence besieging the Black community.

As we defend our own families, we must answer the call not simply to be in solidarity but because the problems our communities face and the solutions we seek are linked together.”

Ending police brutality, the criminalization of youth of color and the militarization of our communities is critical building the safe, supportive and quality schools all young people deserve. It will take concerted efforts from every sector of society to turn that positive vision into reality. Teachers can use curriculum such as this one developed by the Malcolm X Grassroots Movement to critically discuss extrajudicial killings with their students, and they can employ restorative justice techniques to help address students address issues as they arise in the classroom. Young people, parents and everyone can also get involved in local organizing to build power in affected communities. Find out about important organizing work through the Alliance for Educational Justice, Journey for Justice, Center for Popular Democracy and the Gamaliel Network.

RT @FergusonUnity 'Black lives matter too': The powerful signs behind the violence on the streets of #Ferguson pic.twitter.com/JOTuqCyjvq

“@PowerU305: A must read: "This Was Michael Brown's High School" via Diane Ravitch #Ferguson #NoEducationNoLife http://t.co/nYThbhtahv”

The continued necessity of Black Studies, Ethnic Studies, Gender Studies & the humanities oughta be crystal clear in this moment. #Ferguson

Jameila White walked a mile to #Ferguson to hand out free water, and milk to relieve burning from tear gas. pic.twitter.com/6Kwq0rPEGI