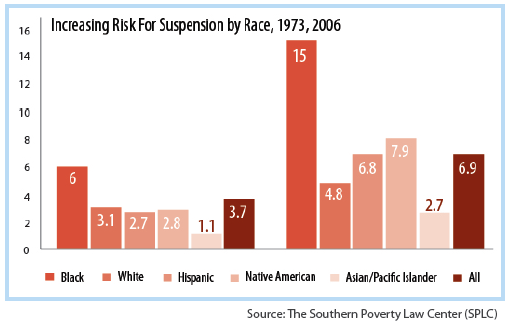 It’s a simple fact that schools must be safe environments for teachers to teach and children to learn. But harsh discipline policies that are pushing out students for minor infractions defy common sense.

When children aren’t in school, they are missing out on educational opportunities, creating a cycle of misbehavior and lost opportunity – and statistics show they are more likely to drop out or get into serious trouble with the law.

Across the country, the combination of overly harsh school policies and an increased role of law enforcement in schools has created a “schoolhouse-to-jailhouse track,” in which punitive measures such as suspensions, expulsions, and school-based arrests are increasingly used to deal with student misbehavior, and huge numbers of youth are pushed out of school and into prisons and jails.

To protect each child’s civil right to a high-quality public school education, we must hold our school leaders accountable for enacting discipline policies that treat students equitably and give teachers and school administrators the tools and the training they need to keep our children in the school buildings where they can continue to excel academically and thrive socially and civically. 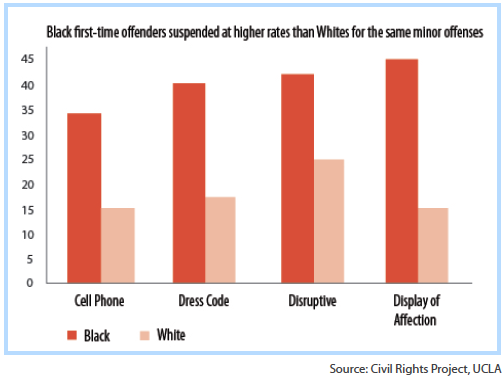 In New York City alone, students spent more than 16 million hours serving suspensions between 1999 and 2008, according to the 2011 report “Education Interrupted: The Growing Use of Suspensions in New York City’s Public Schools."

In many communities, this transforms schools from places of learning to dangerous gateways into juvenile court. This is more than an education crisis; it is a racial justice crisis, because the students pushed out through harsh discipline are disproportionately students of color.

In a study released in October 2011, Daniel Losen, a senior education law and policy associate at UCLA’s Civil Rights Project, traces the educational consequences of harsh disciplinary measures that are doled out unevenly to students of color. Losen’s findings demonstrate that students of color are given harsher punishments than their White peers. Moreover, the types of behavior for which they’re being punished more often require a judgment call by teachers and administrators, suggesting that Black students are more frequently called out for misbehavior than their White classmates. 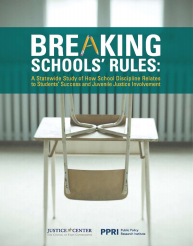 "Breaking Schools’ Rules," a recent multi-year school discipline study in Texas from the Council of State Governments provides evidence that suspensions and expulsions are linked to lower graduation rates, higher rates of later criminal activity and that children of color are more likely than their White peers to face the most severe punishments. 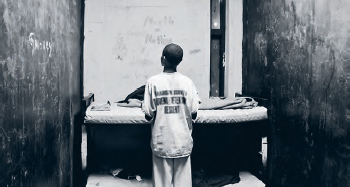 Relying on harsh discipline policies robs teachers, administrators and parents of the chance to help children learn from their mistakes and keep them engaged in the classroom, instead of idling at home or in the streets.

Compelling data and powerful organizing are underscoring the need for systemic changes in school discipline policies that wrongly favor punishments such as suspensions and expulsions instead of constructive approaches for managing behavior and encouraging learning.

And yet, after years of high-profile examples of zero-tolerance policies gone awry, many school systems continue to enforce such counterproductive measures in vain attempts to show the world they are doing something – even if it’s often the wrong thing – to deal with discipline on school grounds.

“Schools that rely on security guards and metal detectors to create safety may end up creating an environment that is so repressive that it is no longer conducive to learning.”

In a recent news article, The Baltimore Sun reported about two situations involving students who were suspended after mistakenly – by all accounts, not maliciously – possessing items that school officials considered to be weapons.

In one case, two high school lacrosse players were suspended for several days because they were carrying a pen knife and lighter, which they said they used to fix their lacrosse sticks. In another recent case, a 16-year-old girl who was suspended is being referred to juvenile authorities and could be charged with possession of a weapon on school property after a former friend told school officials that the girl was carrying pepper spray – which her mother had given her to protect herself while walking to school in the dark morning hours after the teen had been threatened. In the pepper spray case, the girl was told by school officials not to contact her teachers and wasn’t able to keep up with classwork. 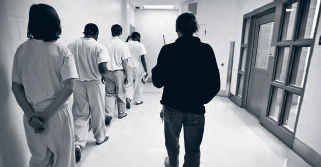 Often referred to as zero tolerance, these policies leave no room for school administrators and teachers to use their own common sense to handle such situations, and take a toll on already beleaguered judicial systems.

The U.S. Department of Education maintains that nationally more than 3 million students each year are suspended and nearly 100,000 more are expelled, from kindergarten through 12th grade, according to an article that Steven C. Teske – a juvenile court judge in Georgia who is using research data to try to change the way school systems handle discipline issues – recently wrote for the Atlantic Philanthropies website. Thousands are arrested and referred to juvenile court for disciplinary problems that were previously handled in school. Most are boys. Most are African-Americans.

As Teske, who was quoted in the Baltimore Sun’s article, said, zero tolerance “goes against the objective of schools, and that is to graduate students.” 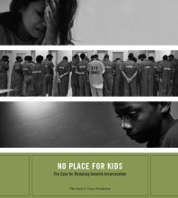 "NO PLACE FOR KIDS: The Case for Reducing Juvenile Incarceration"

Putting young people in jail – particularly for nonviolent offenses – is a failed strategy, according to a recent report from the Annie E. Casey Foundation that relied on decades of research and data. The report’s most scathing findings include that youth incarceration does not reduce future offending; provides no overall benefit to public safety; wastes taxpayer dollars; and exposes youth to high levels of violence and abuse.

States spend an annual average of $88,000 per youth to lock up juvenile offenders in correctional facilities but are not yielding any benefits from a public safety, rehabilitation or cost perspective, according to the report – which documents four decades of scandals and lawsuits over abusive conditions in juvenile institutions and reinforces the growing consensus among experts that the current incarceration model provides little public safety benefit.

Roughly 60,500 U.S. youth – disproportionately young people of color – are confined in juvenile correctional facilities or other residential programs on any given night, according to an official national count of youth in correctional custody conducted in 2007.

Across the country, more educators, parents, students and community leaders are gaining momentum in challenging the overreliance on zero-tolerance and other policies and practices that put one-size-fits all solutions in front of common sense and the well-being of our young people.

The Charles Hamilton Houston Institute for Race and Justice’s “Redirecting the School to Prison Pipeline” project also tackles this issue, saying “the School to Prison pipeline is derailing individual lives, devastating families and communities, and threatening our nation’s economic future. Yet, preliminary research indicates that jail is not the inevitable destiny for children trapped within this pipeline.

“Rather, their journey through the pipeline is accelerated by the convergence of ill-conceived policies and practices permeating both educational and juvenile justice systems, and by the failure of these two systems to work together to improve the life chances of at-risk youths. Fortunately, these ineffective and costly policies can be dismantled and replaced with interventions and programs aimed, first, at keeping more at-risk youths in school through, at a minimum, completion of high school, and, second, at helping those who have dropped out or been sent to juvenile halls to successfully re-enter communities and schools.”

Voices of Youth in Chicago Education (www.voyceproject.org), an organizing collaborative for education justice led by students of color from seven communities throughout the city of Chicago, recently conducted a cost-analysis that found that not only are these policies ineffective, they are costly. Their research shows that in 2011 Chicago Public Schools spent $51.4 million on security guards but only $3.5 million on college coaches. And even while they are claiming to have a $600 million budget shortfall, CPS is also considering signing a $100 million, three-year contract to place police in the schools.

"What is Zero Tolerance?"

An excerpt from The Advancement Project's Action Kit on ending the Ending the schoolhouse-to-jailhouse pipeline.

“Zero tolerance” is a law enforcement term taken from the “War on Drugs” that began to make its way into school policy in the late 1980s. Since that time, school districts around the country have taken the Zero Tolerance principle, intially intended for weapon and drug offenses, and expanded it so that harsh discipinary practices such as suspensions, expulsions, and referrals to law enforcement are increasingly common for minor misconduc, such as acting up in class, name-calling, and fighting. These policies and practices are often rigid and unthinking (e.g., ten-day suspensions for a fight regardelss of circumstances), and reflect a “get touch” approach to discipline in which the punishement rarely fits the misconduct (e.g., five-day suspensions for “disrespect to authority” or “disobedience”). They are also unforgiving leaving students without any “lessons learned” and a discipline record that follows them from grade to grade.

The Action Kit, available for download here (PDF), helps you collect and analyze data about school discipline policies and practices.

Meanwhile, Colorado students, parents, community members and organizational allies have made a significant stride in the effort to end the school-to-prison pipeline with the passage of legislation that calls on leaders to formulate alternatives to zero tolerance policies. See this Washington Post article (www.washingtonpost.com/local/education/more-schools-are-rethinking-zero-tolerance/2011/05/26/AGSIKmGH_story.html) for highlights of action in other states:

“This rethinking has come in North Carolina and Denver, in Baltimore and Los Angeles — part of a phenomenon driven by high suspension rates, community pressure, legal action and research findings. In the Washington region, Fairfax County is considering policy changes after a wave of community concern; school leaders in the District and Prince George’s, Arlington and Montgomery counties have pursued new ideas, too,” the article states. “Now, ‘it’s become evident that simply suspending students and putting them on the street comes back and bites you,’ said Bob Wise, a former governor of West Virginia and president of the Alliance for Excellent Education.”